Most of us have been blessed with good health and a childhood filled with hope and dreams for a great future. Sadly, there are many children who are not so lucky and, but for the good fortune of being born in the right place, any one of us could have been born with a life threatening heart condition or a dream ending cleft and/or palate defect. Happily, there are kind people and charities who lead the way in helping the less fortunate children of this world.

Among them are Save a Child's Heart and Smile Train and this page is called Hearts and Smiles, in recognition of the amazing work these people do.

Monroe Bridal / LailaMonroe.com is proud to support Save a Child’s Heart and Smile Train and we encourage you, our friends and customers to learn more about and support these amazing humanitarian organizations. In 2012, Save a Child's Heart was awarded special consultative status by the United Nations Economic and Social Council (ECOSOC). We urge you to click the links above to learn more about them and the great work they do. Approximately every 29 hours Any donations you make (direct to the charity of your choice) will have save the life of a child and bring a new smile that will help light up the world.

Every 29 Hours a Life is Saved

Save a Child's Heart’s (SACH) mission is to improve the quality of pediatric cardiac care for children from developing countries, who suffer from congenital heart disease and to create centers of competence in these countries.

It's remarkable to think that every 29 hours, a critically ill child, mostly from developing countries, is saved in the pediatric cardiac surgical unit of a Save a Child's Heart facility. Since its inception in 1996, SACH’s medical team has treated and saved over 3,400 children from over 43 countries. In October 2012, ten year old Maria from Angola became the 3,000th child to be treated by SACH. (See the full story by clicking here.) And in June 2016, four year old Sanusey from Gambia became the 4,000th child to undergo life saving surgery thanks to Save a Child's Heart. Their services are provided in the Wolfson Medical Center (WMC) in Israel by a team of 70 dedicated experts who, from chief surgeon to physiotherapist, contribute a substantial portion of their time without any additional payment from SACH. 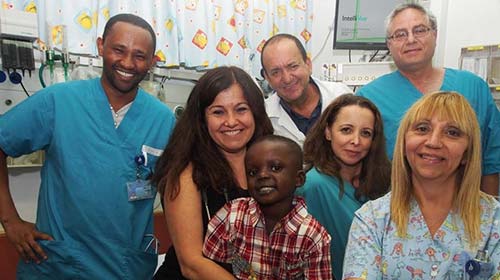 All children, regardless of race, religion, sex, or financial status receive the best possible care that modern medicine has to offer. Save a Child's Heart is a non-profit organization. To find out more about SACH, click on the image above. We hope that you can join us and lend a helping hand with much needed donations.

The Story of Kevin from Indonesia

Kevin is the first baby from Indonesia to be treated by Save a Child's Heart.  When he was just eight days old, his mother was told that he had a congenital heart disease and required urgent surgery to save his life. When Kevin was nine months old, the founder of LailaMonroe.com Michael MacMahon learned of Kevin's fate and decided that something had to be done before it was too late. After much research and three months after making initial contact with SACH, good news came through that the doctors at SACH had accepted Kevin for treatment. Michael then contacted Turkish Airlines to seek their assistance and they kindly agreed to sponsor return flights from Indonesia to Isreal for Kevin and his mother.

On 15 December 2010 Kevin and his mother arrived in Israel to prepare for his life saving surgery. On 3 January 2011, Kevin underwent successful open heart surgery at Wolfson Medical Center.

This life saving surgery has given Kevin a new life and new hope. Recovery was long and slow and he remained in Israel for almost 8 months during which time SACH arranged for doctors at Soroka Medical Center to perform complex surgeries to repair Kevin's cleft lip and palate, so that now Kevin can look forward to a new and normal life. Kevin turned 6 years old in November 2015. Today, he has a big smile and is a living a normal life at home in Indonesia, running and playing with his big sister and his friends.

LailaMonroe.com is proud to have been involved in helping baby Kevin and no words can express our thanks for the kindness of SACH, all their staff and volunteers, the medical staff at Wolfson Medical Center (Tel Aviv) and at Soroka Medical Center (Beersheba) and of Turkish Airlines as well as the considerable assistance and support given by Steve Stein of IsraIndo.com

That Save a Child's Heart exists is down to the extraordinary vision of the late Dr. Amram (Ami) Cohen, a great surgeon, an inspiring leader and a warm caring human being who founded SACH and in doing so, has helped more than 3,400 children just like Kevin to live normal happy lives.